INTERVIEW - How Swissport Zurich is relying 100% on kiosk for AHL creation in one terminal? 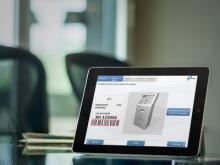 Carmen Haemig, Lost & Found supervisor for Swissport at Zurich airport, answered to our questions to share her experience and advice with the supervisors who would be interested in implementing a similar organisation in their stations.

Carmen, could you please explain us how Swissport is organized now in the two terminals at Zurich airports?

The terminal 1 is mostly used for short-haul flights within the Schengen zone. In this terminal, since June 2016 we have:

In the terminal 2, Swissport has:

Was it difficult to convince airlines of this 100% self-service organisation in the terminal 1?

The first airline we approached was our main carrier since most of the flights arriving in terminal 1 are their flights. Airlines are looking for innovative solutions and see the benefits of self-service so it was not difficult to convince them.

Also we explained airlines that passengers will never be left without assistance or forced to use the kiosk:

You said that there is always an agent next to the kiosks to check that the passenger can use the kiosks. What kind of checks is this agent performing?

In fact our passengers never go straight to the kiosks. Their first contact is with an agent who is standing at a stand-up counter equipped with a PC which is located next to the kiosk. Here the agent does the following preliminary checks:

In terminal 1, if after these checks, the AHL needs to be created by an agent at the counter, we give the passenger a card stating that the initial checks were already done so that when the passenger gets to the terminal 2, he can directly go to the counter for the file creation.

What is the feedback you are getting from passengers arriving in Terminal 1 where there are only kiosks and no counter?

Most of the passengers are willing to use the kiosk and see this as the opportunity to do their declaration themselves and leave the airport quickly. Of course we sometimes have passengers wondering why “they have to do our job”. But generally speaking we have not noticed an increase of negative feedback since this organisation is in place.

I think it’s a matter of communication: the more enthusiastic the agent is about the kiosk, the more willing to use the kiosk the passenger is.

What is the feedback from your agents?

All of our agents are working at the terminal 1 at some point of their work day/week. We have various feedbacks: some find it difficult to invite the passengers to use the kiosk; some feel more comfortable with this new organization.

In any case, our agents know that passengers are not forced to use the kiosk. Reluctant passengers are informed they can go to terminal 2 to declare their missing bags at the counter, but that they might have to wait.

For Swissport, what is the main advantage of this new organisation?

With the new organisation, we only have one counter at Terminal 2 which has a main advantage:

90% the agents are gathered in the same office at Terminal 2 which eases the communication and collaboration between agents. In the past 40% of our agents were working at the terminal 1 and 60% at the terminal 2. In case of disruption in one terminal, agents needed to be shifted from one terminal to another, this was not convenient.

What are the statistics regarding kiosk usage?

Since we started in June, each month between 45% and 50% of the AHL files are created at the kiosk and the rest are created via the normal application  at the counter. We have used e-AHLreport mainly in case of important disruption like when a flight lands without any or only few baggage on board.

Do you have recommendations for other supervisors who would like to implement a similar organisation in their station?

I think we have found a good balance between self-service and agent solutions so that we attend the passengers in a timely manner while being able to handle special cases requiring an agent intervention (items to be declared to customs, illiterate passengers, etc.).

My main advice is to not leave the kiosk unattended. There are several cases where the assistance of an agent is welcome: not all passengers are familiar with new technologies, boarding passes and bag receipts look different from one airline to another confusing the passengers about which data should be entered, also passengers might be tempted to use the kiosk to report lost properties.

Last question: in terminal 2 since June 2016 you have been using one of the latest kiosk models with a bigger screen resolution (1920*1080). What do you think of these kiosks?

The big size of the screen is definitely a plus. It is more user-friendly for customers who are not familiar with touch-screens. It is easier to click since the buttons, icons and keyboard are displayed in a bigger size. We noticed it is especially convenient for elderly passengers.